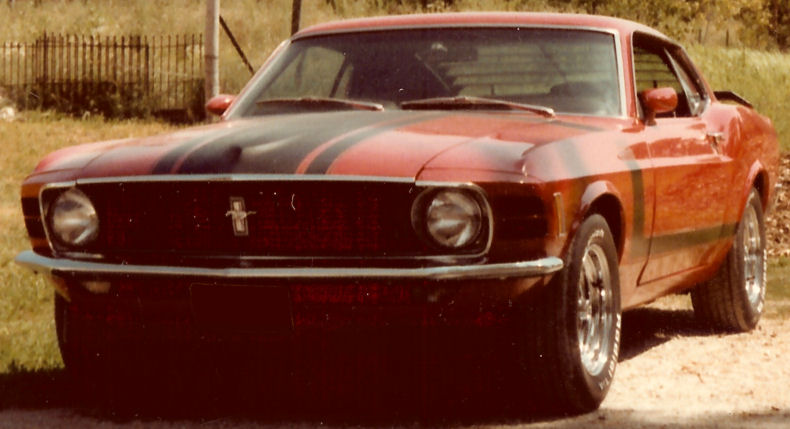 The Camaro/Mustang rivalry had begun in 1967 with the introduction of the Camaro by Chevrolet. The Camaro was the largest threat to the lead Ford had in the "pony car" field, a niche of car manufacturing largely created by Ford with the introduction of the Mustang in mid-year 1964. Despite the lead Ford had in this field, the performance of the Mustang did not stack up to that of the Camaro. The small block and big block Chevrolet were more than a match for the 289 and 390 Fords placed in the Mustang. Ford, in an effort to burnish their "total performance" image introduced the 428 Cobra Jet in mid-year 1968, and in 1969, built one of Detroit's most interesting power plants, the Ford Boss 302 engine. The design was a composite engine using the "tunnel port" Windsor block and large Cleveland heads[1]. The engine was fitted to Mustangs sold to the public in order to allow Ford to use the new engine to compete in the Trans-Am series.[2] The Boss 302 Mustang was designed by Larry Shinoda, a former GM employee. He placed the unique reflective "c-stripe" strips on the car, and eliminated the fake rear fender scoops found on the 1969 Mustang model. The distinctive styling included optional black horizontal rear window shades, blackout hood, and was one of the first production cars with a front spoiler and rear deck wing. 7,013 were produced of the better-known 1970 model which was offered for $3,720. It is recognized by the side "hockey" stripes which started along the top of the hood, along with the 1970 grille which replaced the 4 headlights with two vents in the outside position, retaining two headlights within the grille opening. The dual exhaust system was redesigned, along with the competition suspension and a standard Hurst shifter. The intake valves were smaller, and aluminum valve covers replaced the chrome.[3] The car came with standard disc brakes on the front, larger sway bars, heavier duty spindles, reinforced shock towers, a four speed transmission (all that was offered), and most importantly, the solid-lifter Boss 302 engine with its free-breathing Cleveland style heads, which had valves larger than most motors over a third larger in displacement[1]. This "G Code" engine was underrated at 290 hp (216 kW).[citation needed] The 1970 car could accelerate from 0-60 mph (97 km/h) in 6.9 seconds. The quarter mile (~400 m) took 14.6 seconds at 98 mph