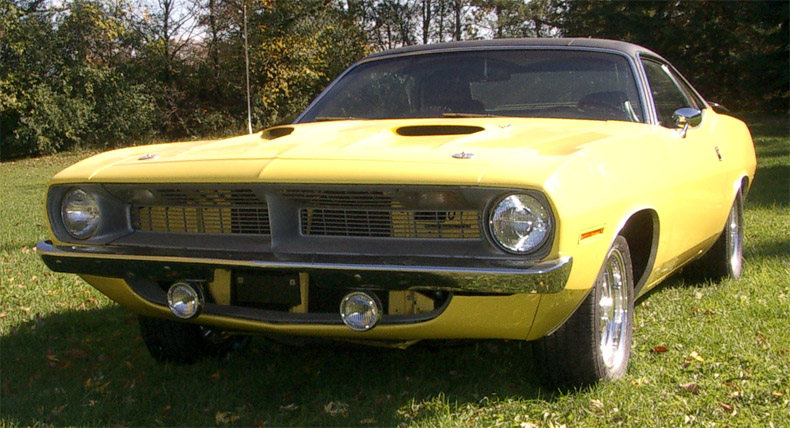 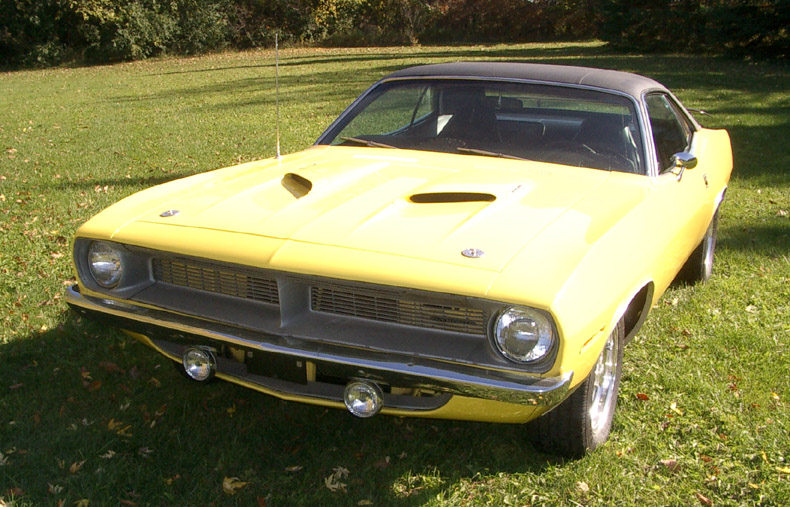 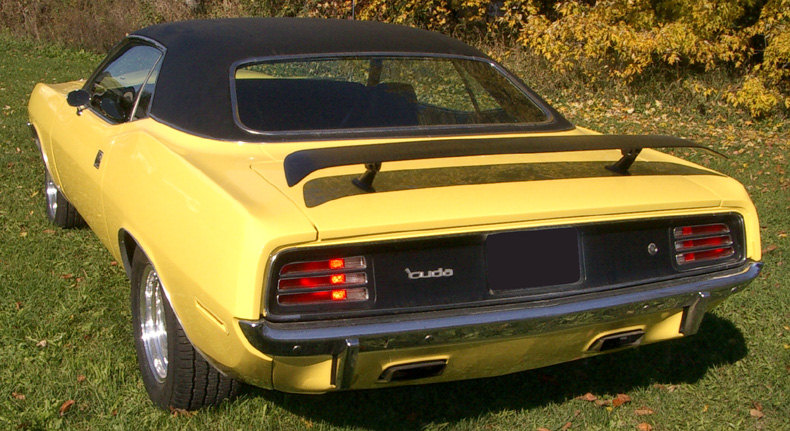 The Plymouth Barracuda is a 2-door car that was manufactured by the Plymouth division of the Chrysler Corporation from 1964 through 1974. The first-generation Barracuda, a fastback A-body coupé based on the Plymouth Valiant, had a distinctive wraparound back glass and was available from 1964 to 1966. The second-generation 1967 – 1969 Barracuda, though still Valiant-based, was heavily redesigned. Second-generation A-body cars were available in fastback, notchback, and convertible versions. The 1970 – 1974 E-body Barracuda, no longer Valiant-based, was available as a coupé and a convertible, both of which were very different from the previous models.

The redesign for the 1970 Barracuda removed all its previous commonality with the Valiant. The original fastback design was deleted from the line and the Barracuda now consisted of coupe and convertible models. The all-new model, styled by John E. Herlitz, was built on a shorter, wider version of Chrysler's existing B platform, called the E-body. Sharing this platform was also the newly launched Dodge Challenger; however, no sheet metal interchanged between the two cars, and the Challenger had a 2-inch (51 mm) longer wheelbase. The E-body Barracuda was now "able to shake the stigma of 'economy car'."[9] Three versions were offered: the base Barracuda (BH), the luxury oriented Gran Coupe (BP), and the sport model 'Cuda (BS). The high-performance models were marketed as 'Cuda deriving from the 1969 option. The E-body's engine bay was larger than that of the previous A-body, facilitating the release of Chrysler's 426 cu in (7 L) Hemi for the regular retail market. Two six-cylinder engines were available — a new 198 cu in (3.2 L) version of the slant-6, and the 225 — as well as six different V8s: the 318, 340, 383( 290 h.p. two barrel & 330 h.p. Super Commando in Barracuda & Gran Coupe, 330 ---arguably 335 h.p.--- as the 'Cuda model's base motor ) 440-4bbl, 440-6bbl, and the 426 Hemi.[10] The 440- and Hemi-equipped cars received upgraded suspension components and structural reinforcements to help transfer the power to the road. Other Barracuda options included decal sets, hood modifications, and some unusual "high impact" colors such as "Vitamin C", "In-Violet", and "Moulin Rouge". Swede Savage and Dan Gurney raced identical factory-sponsored AAR (All American Racers) 'Cudas in the 1970 Trans-Am Series. The cars qualified for three pole positions but did not win any Trans-Am races; the highest finish was 2nd at Road America.[11] A street version of the AAR 'Cuda was produced, powered by the 340 cu in (5.6 L) "six pack" (three two-barrel carburetors) engine. The Barracuda was changed slightly for 1971, with a new grille and taillights, seat, and trim differences. This would be the only year that the Barracuda would have four headlights, and also the only year of the fender "gills" on the 'Cuda model. The 1971 Barracuda engine options would remain the same as that of the 1970 model, except the 4-barrel carbureted 440 engine was not available; all 440-powered Barracudas had a six-barrel carburetor setup instead. The 426 Hemi remained available, and the 1971 Hemi Cuda convertible is now considered one of the most valuable collectible muscle cars. Only eleven were built, seven of which were sold domestically, and examples of these cars have sold for US$2 million.[12] In 1970 and 1971, the shaker hood and the Spicer-built Dana 60 rear axle were available. The shaker hood was available with 340, 383, 440-4bbl and 440-6bbl, and 426 Hemi engines. The heavy-duty (and heavy) Dana 60, with a 9¾ in ring gear, was standard equipment with manual transmissions and 440-6bbl and 426 Hemi engines, and was optional on those with the automatic transmission.

With a new grille, dual headlights and four circular taillights for 1972, the Barracuda would remain basically unchanged through 1974, with minor changes to the bumpers to conform with federal impact standards being the only significant variations. Big Block engines (383, 440, & 426 Hemi) were no longer offered. Additionally, convenience/comfort items such as power windows, and interior upgrade options were dropped. For 1972 only three engine choices were offered: a 225 six, the 318 (base engine for both 'Cuda and Barracuda)and 340. The 225 was dropped after 1972, with the 318 and 340 (replaced by the 360 for 1974) being the only engine choices.

As with other American vehicles of the time, there was a progressive decrease in the Barracuda's performance. To meet increasingly stringent safety and d exhaust emission regulations, big-block engine options were discontinued. The remaining engines were detuned year by year to reduce exhaust emissions, which also reduced their power output. There was also an increase in weight as bumpers became larger, and starting in 1970, all E body doors were equipped with heavy steel side-impact protection beams. Higher fuel prices and performance-car insurance surcharges deterred many buyers as the interest in high performance cars waned. Sales had dropped dramatically after 1970, and while 1973 showed a sales uptick, Barracuda production ended April 1, 1974, ten years to the day after it had begun