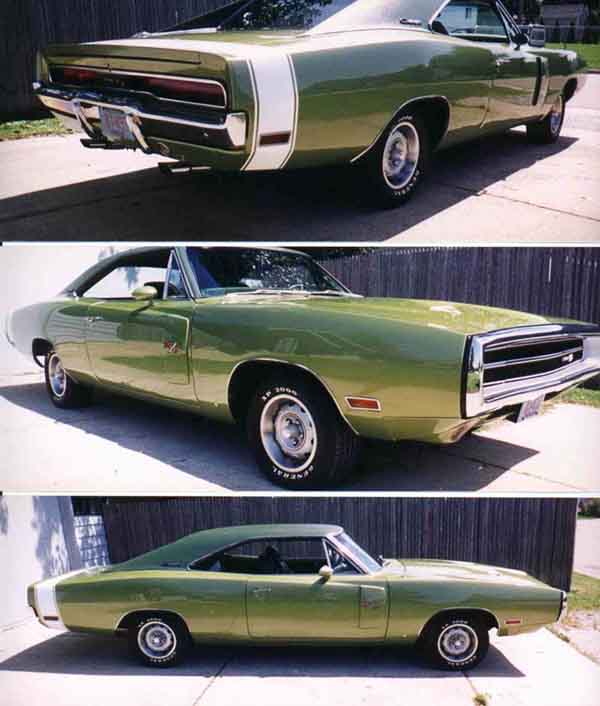 In 1970 the Charger changed slightly again. This would be the last and rarest year of the 2nd generation Charger and it now featured a large wraparound chrome bumper and the grille was no longer divided in the middle. New electric headlight doors replaced the old vacuum style. Side markers were now actual lights. The taillights were similar to those used in 69, but 500 and R/T models came with a new more attractive taillight panel. On the R/T new rear-facing scoops with the R/T logo were mounted on the front doors, over the door scallops. A new 440 or HEMI hood cutout made the option list for this year only. In order to achieve the desired look, Dodge painted the hood scallop inserts black and put the silver engine callouts on top. New "High Impact" colors were given names, such as Top Banana, Panther Pink, Sublime, Burnt Orange, Go Mango and Plum Crazy (sometimes nicknamed "Statutory Grape"[2]). The 500 returned for another year, but now it was just a regular production Charger unlike the limited production NASCAR Charger of 1969. Interior changes included new high-back bucket seats, the door panels were also revised and the map pockets were now optional instead of standard. The ignition was moved from the dash to the steering column (as with all Chrysler products this year), and the glove box was now hinged at the bottom instead of the top as in 1968-69. The SE "Special Edition" option added high end luxury to a full on muscle car and was available as 500 SE and R/T SE models. The all new pistol grip shifter was introduced, along with a bench seat, a first for the Charger since its debut. A new engine option made the Charger's list for the first time, the 440 Six Pack. With three two-barrel carburetors and a rating of 390 hp (291 kW), it was one of the most exotic setups since the cross-ram Max Wedge engines of the early 1960s. The Six Pack was previously used on the mid-year 1969 Dodge Super Bee and Plymouth Road Runner and was notorious for beating the Hemi on the street. Despite this hot new engine, production slipped again to 46,576 but most of this was due to the brand new E-body Dodge Challenger and the high insurance rates. In the 1970 Nascar season it was the 1970 Charger that tallied up more wins (10) than any other car....including the notorious 69 Dodge Charger Daytonas and Plymouth Superbirds, giving Bobby Isaac the Grand National Championship.